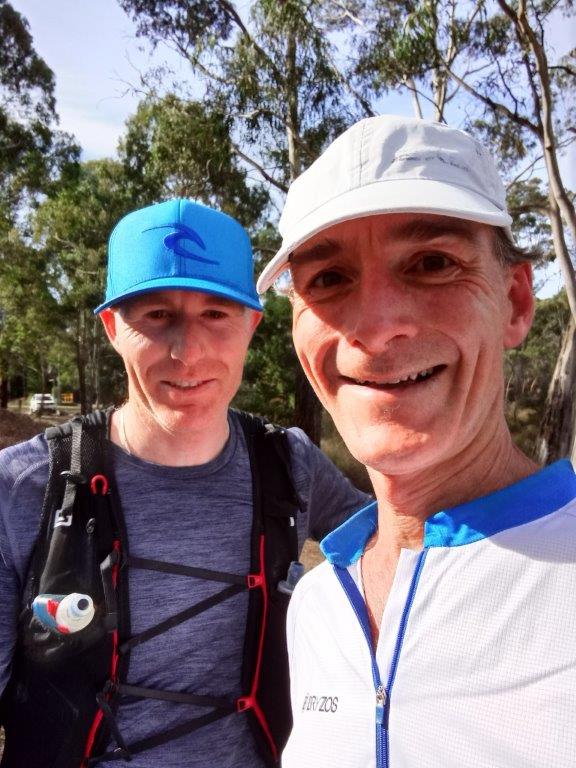 Pulling up to the skate park in Blackmans Bay, we were greeted by a beautiful morning – perfect weather for rogaining around Kingborough’s beachside suburbs. My lovely wife and previous rogaine partner said I had to find someone else for this one as she was washing her hair. So I was fortunate to end up with Ian, whose regular partner was busted and seemed pretty happy to rein in his pace to match mine. In fact he was so blasé about the prospect of running 4 hours with me he went for a kayak in the morning.

I was looking forward to a solid run and breaking out of my usual running routes around the neighbourhood. With years of local running I figured we could cover about 40km depending on how hilly we made it. I think route planning before the start is a really fun but underappreciated part of rogaining. The fancy cardboard, pin and string set-ups used by a few experienced teams at the last rogaine caught my eye, so I brought all the bits along. What I discovered is that it takes next level coordination to manage everything in a breeze. As we plotted our route we reached the end of the string and still hadn’t covered all the controls… this was not a good sign. Our route to collect the lot would have been about 48km so unless we grew wings, we were going to have to drop some controls.

Out of the start we followed a group of thirty or more north to the first control by the blowhole, then up and down along the coast to the Kingston Beach sailing club where a pair of salty seadogs looked on curiously. The Alum Cliffs drew us on, then back to my favourite storm water ponds in Kingston, a sneaky water tap in a playground in Firthside, under the highway and a wave to our neighbours as we visited number 94. Then it’s off to the playground where we used to take the kids, the suburb where we used to tour the xmas light shows and the local supermarket where we used to buy toilet paper. It’s feeling hyper-local at this point. Things change as we climb Boronia Hill and punish ourselves up and down along its eastern slopes. It’s clear that we aren’t going to collect all the controls, so the scenic coastal route with lots of points gets the chop. Another in Huntingfield and four near the eastern boundary of Peter Murrell reserve fail the ‘points for effort’ test, leaving us with a stripped down run for home.

Nearly three hours in and our brains aren’t quite so fresh. A car is parked in front of the bollards at 60 and we spend a minute looping back and forth. Crossing to the western slopes things look very strange approaching 71 but Mark and Gayle show the way. And then we are pushing hard through sneaky single track to 42, down the hill to 83 and back in familiar terrain in Peter Murrell reserve, going bush to the dinghy on the dam, then on to the entry gate where two blurry brains tried to tally 20 toadstools.

Time cracked on, so we did too. Down to Stinkpot Bay and then the long slow slog up, up, up past the ‘Thunderbird’ to Brightwater Ave. From here it was all downhill, with just a blip as I suggest we visit 24 which cost two minutes and perhaps the brain-power we will need a little later. On to the kayak, kindly replaced on the rooftop, down the vacant block and now nearly two kilometres left to cover in eight minutes. Around Sherburd Park and scanning the wall, we spot a turtle, but no red tongue… We search in vain, our bleary eyes skipping past the gecko just the other side of the stairs and jog down the street, too far. Back we go, it must be here – there it is and it’s huge!

And now it’s really on. That minute dropped will make us late and 43 is no longer an option. We spy the donkey at 39 and run, run, run to limit our losses.

One minute over time we reach the finish, 41km under our belts, ruing the mistakes in the last minutes but very happy overall.

Huge thanks to the organising team – the clues were entertaining, the views awesome and I have a great supply of new hilly running options. And thanks to my excellent partner Ian, your constant supply of chatter, good humour and glucose tablets made this a really fun day out.