2018 was a good year for us: six 24-hour rogaines (including the 29 hour Bush Search and Rescue NSW Navshield). It was going to be five, ending with the NZ Champs in Dunedin, but with the horrible weather combined with the rugged terrain it turned into the toughest we’ve ever done. Back in Sydney two days later, still bummed with our performance, we made a last-minute decision to enter ‘Return of the Oysters Rogaine’ the following weekend. 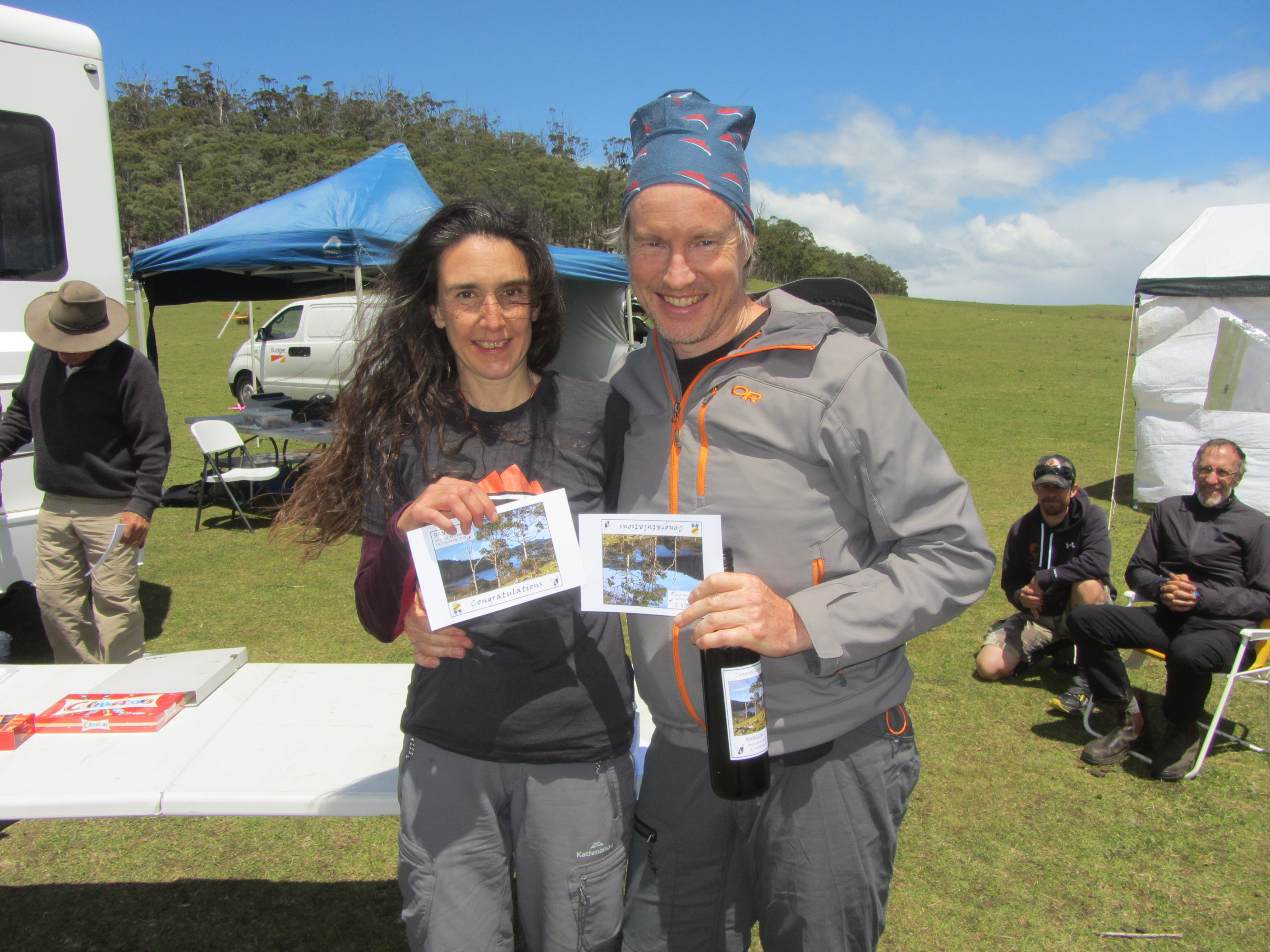 We flew to Hobart after work Friday night, had a comfortable sleep in a lovely B&B in Sorell, picked up some treats from the Dunalley bakery Saturday morning.

Arriving at the Hash House in good time we were pleased to find the event had record turnout – more than 160 participants! The event promo promised lovely rolling hills mixed with some farmland and spectacular coastal scenery. Our first glance at the map confirmed that it wasn’t just marketing – the course offered an exciting mix of open land, native forest with some dark green bits – mainly in the SE corner. Our route planning had two major considerations: one – having to fly our food in, we weren’t confident we had enough for the full event; and two – with the forecast of 10-25mm of rainfall sometime after midnight we weren’t sure how much that might slow us down. To deal with #1 we planned a figure of eight route looping back via the HH (presumably about six hours into the event). Nothing better than some fresh, warm HH food in the middle of a 24h Rogaine! To deal with #2 we added new pairs of rain overpants cut off below the knees – the freezing rain at Dunedin still fresh in our minds. We calculated that the west had the best point yield so we would try to clean up everything there first, the south east was next (even though it was steeper and dark greener) an we’d keep the northern peninsula for last because it had a lower yield and would be easy to cut short if we were late.

The event began and we immediately made our first mistake – we ran right past 22! After confirming that’s what we’d done, we left it for later and kept on. Not a good start! Our anti-clockwise loop west of the HH surprised us with fast going, straightforward checkpoints and terrain that was even more open than what the map suggested. There was some slow going around 80 and it was looking a bit slow towards 59 so we made a quick decision to skip it and get 27 instead, staying on more open ground. Nearly back at the HH, we find the flag for 22 fallen on the ground – is this why we missed it at the start? Overall, the fast going meant we were back at the HH more than an hour earlier than planned – and before the kitchen had opened. Bummer!

Grudgingly we reloaded packs with our remaining dry food and hurried south towards the intimidating green patches on the map. The course-setters notes had been quite helpful here, particularly with advice about checkpoint 33: “There are only 3 reasons to visit checkpoint 33: 1. You are trying to clear the course; 2. You want a new pair of shiny rogaining pants and looking for an excuse to shred the old ones; or 3. You are crazy.”

With none of the three applying to us (in our opinion) we decided to stay away from it. Four hours on and we’d only seen three other teams. Hmm… maybe the SE corner of is bait for gullible rogainers and we’d fallen for it! Our route was quite conservative, using mostly tracks. Still, the in and outs to checkpoints involved quite thick bush. 75 in particular took us on a slow 40-minute bash up and down the spur that had us mulling what else the setter might have planned for us. It almost ended badly too with one of us becoming convinced we must have passed it, only to be saved by the persistence of the other. It appeared only one other team was crazy enough to have attempted it.

It was midnight already and the fatigue was creeping in. Luckily the weather was still quite mild and we took a very satisfying 10-minute nap on the side of the track. Another couple of hours and another couple of scrubby checkpoints – or is it just us struggling to find the best route in the dark? We made some adjustments in our approach – more tracks, less cross country. It was also time to drop some lesser checkpoints to get us back on schedule. Another short nap and we started to feel lucky – it was getting close to sunrise and the forecast rain hadn’t arrived. Perhaps it has already passed? And then – just before dawn it hits us! Short and sharp – lasting no more than an hour but it managed to soak us and the bush completely (little did we know the mess it made of the HH!). Still, it was a pleasant change from the weather we’d experienced in Dunedin so it felt like we hardly noticed it. Meanwhile dawn arrived just in time to help us find 102 – a tricky one in the dark we hear later. With the sunrise our spirits rose and the pressure was on to make the most of the final 6-hour “sprint” to the finish. This is usually the time to make fast and crucial changes to the route – a mistake can be disastrous, but pushing hard for every checkpoint can make the all difference to your placings. This is our favourite part when we get it right. Luckily the northern part of the course was much more open and fast-going much to our relief. We cut 71, 46 and 104 so we could pick up everything else on the way back. Running when we could, we stressed about whether we had enough time. It’s only when we got to 31, 1.5km from the HH that we felt confident – barring a stuff up at the last checkpoint, 42. With a little time up our sleeves we still ran to the finish in case there was a team on the same score (it’s happened!).

We really did enjoy the whole event – the course, the weather, the terrain, even the green bits, and of course the hospitality of the Rogaining Tasmania. Winning was a surprise and a bonus to an already satisfying end to the season.