When did you start rogaining and why?

In the late 1980s I worked for the Geology Dept at the Uni of WA and the place was a little rogaine-mad. Neil Phillips (one of the founders of rogaining) was working there at the time. I suspect my first involvement was helping to load the hired rogaine truck with food as some catering was supplied by UWA. I recall collecting checkpoints after the Maradong Madness in October 1987. My first event was the Heartbreak rogaine in 1989 where we came an impressive 123rd overall. 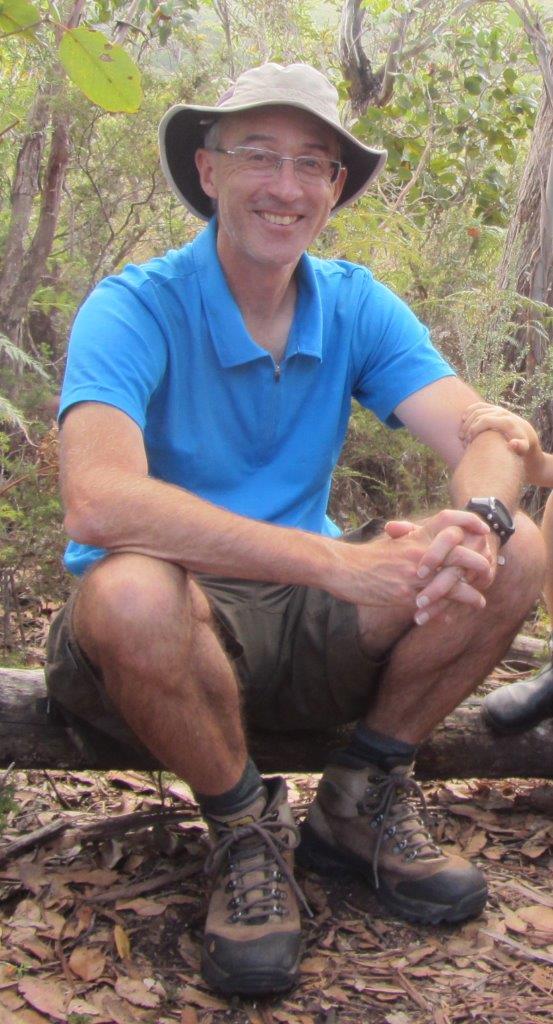 What is your greatest rogaining accomplishment?

I met my wife, Kim, through rogaining and a common friend Nigel Aylott. How cheesy is that?

In terms of doing well at big events, our team came 2nd Mixed at the second world champs which were held in outback WA in 1996. I’ve been in teams that were open winners at the WA state champs eight times, against some serious competition. I have a few category wins at Australian Champs thanks to my partners who drag me around and wait patiently as I struggle up the hills.

Outside competing, I’ve been on rogaining committees pretty much non-stop since the early 1990s doing every job at one stage or another except for treasurer. That doesn’t mean I want to be the RT treasurer. I influenced the WA Rogaining Association’s use of digital mapping techniques, and have written software that collates scores and produces event results that has been in use for 23 years.

I was pretty chuffed about Tasmania winning the Interstate Trophy last year, although it should be noted that almost all Victorian teams were unable to attend due to COVID restrictions.

What is your greatest rogaining error?

Gosh. There are so many. I recall limping back into the HH a few years ago at Bangor after coming unglued in the plantations and then being very confused about the farmland on my right-hand side. Turns out we were walking north rather than west and we’d staggered around a road junction without noticing and had travelled several kilometres in the wrong direction. After having a rather successful night at the Where Eagles Soar 2011 Australian Champs in Tassie, we put our brains away at first light and were unable to find a checkpoint because we were about 1.5kms away from where we should have been. I don’t think the leg length was that far.

Your Bangor ‘unglued’ moment wasn't the moment we encountered you crawling onto the road from the saddle at 2am near 70, was it?

Yes. That was the time.

What makes a good rogaine?

A good mixture of terrain types (farm, bush, track networks, no tracks, hills or not) that further complicates the entrants’ course planning. What is easy, what is hard, where do you want to be at night given the weather forecast? Areas that require some skilful map-reading abilities rather than just being able to travel large distances. It may be telling that at the Aust Champs last year my partner and I opted for the big distances rather than the complex navigation.

What has changed in your time rogaining?

For entrants, the big difference is torch technology. I had a rogaining partner who for several years carried around a car headlight and a motorcycle battery. You don’t need to do that anymore.

Replacing punch cards with electronic punching has certainly helped with processing results quickly, although that has introduced some complexities for organisers.

In the good ol’ days rogaining maps were overprinted state government maps. Before my time, checkpoint coordinates were provided and you had to draw the checkpoint locations yourself. Aerial photographs were on display so entrants could annotate their maps with corrections.

These days, in Tasmania, we are fortunate that we can access map data for free via TheList and that LiDAR data is widely available, which we can use to map vegetation density and produce accurate contours.

Do you have a favourite event?

No. I do have some favourite areas: Open Wandoo forests or any event when the wildflowers are on display in WA; the northern Flinders Ranges in SA; and the East MacDonnell ranges near Alice Springs used for the 2016 World Champs was pretty special.

What’s your favourite part of rogaining?

Stopping. That is, getting back to the HH.

What about a favourite checkpoint?

A tough question. I’ll go for scenic value. There are lots of coastal events here in Tassie. Some of the checkpoints on the sea coast at Bangor and on Maria Island were hard to beat.

Do you have a usual rogaining partner?

Normally, yes, in my men’s age category. However, I’ve had to be forgiving when they have been unfaithful. A successful rogaining team is compatible in fitness, navigational ability and attitude.

Do you have any tips for staying awake and alert during a 24-hour rogaine?

Sleep well and avoid being busy with problematic tasks on the nights leading up to the event. It makes a huge difference.

What are to trying to achieve as RT president?

Getting more people involved in the sport. Tasmania has a very outdoorsy population. Why aren’t they all rogaining?

Improving our publicity, documentation and map quality. Event entries have been rising steadily over the last 5 years, and I suspect that the rise of social media is at least partially responsible for this.

Getting more Tasmanian rogainers to travel to interstate or overseas events.

Increasing the number of members with the skills to take over key volunteer roles.

What upcoming event(s) are you looking forward to and why?

That is a pretty easy question. I’m an organiser for the RT event Midlands Muster being held in November this year. COVID has limited our ability to organise bush/farm events, although we’ve not suffered from cancelled events as much as other states. It will be great to have another bush event in Tasmania. As an entrant I’m planning to go the Australasian Champs which are being held in Victoria this October.