The moral of the story: if you've just finished a hard run, gasping for breath and not thinking straight, and Gary Carroll approaches, walk away as fast as you possibly can. 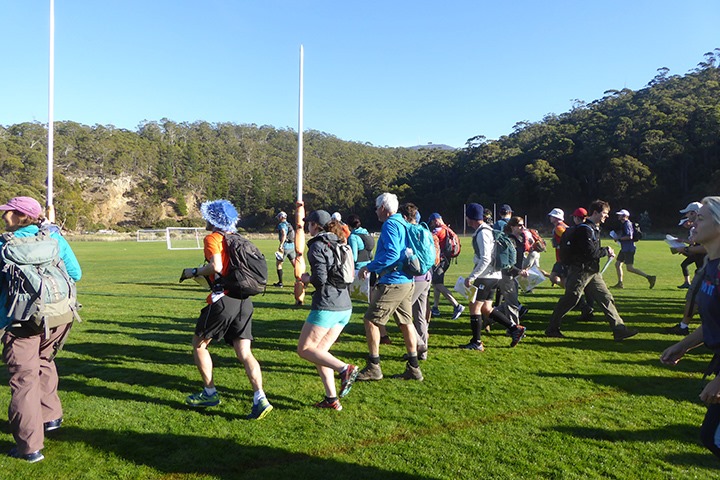 When Gary asked if I was interested in helping with a rogaine, my oxygen-depleted brain thought (a) I've done about a dozen rogaines so (b)  its about time I did my bit and (c) its a long way off so there's plenty of time and anyway (d) how hard can it be?  Thus, somewhat rashly I said yes, immediately recognising my error when I saw the look of surprise in Gary's eyes.

Gary applied his skills of the dark arts and magically came up with a base map. I applied my special skill, procrastinating, leaving it to Easter to do map refinement and corrections.  Then two days before Easter I hurt my back and  spent all my allotted mapping and course setting time lying on the floor watching Fox Sports.

From then on it was a bit of a rush, with Gary sending me ever more frequent polite but increasingly nervous emails inquiring about progress.   The base map was good but the map had to be really precise, particularly when it came to out of bounds areas.  I had nightmares about people inadvertently wandering into unmapped OOBs and being eaten by killer goats or shot by hillbillies.  New housing developments up on Tolmans Hill and out past Lenah Valley also caused me grief.  And while 90% of the tracks were accurate, there were quite a few that weren't. Fortunately I know how to use OCAD software reasonably well so I was able to adjust the map myself. But I did have to phone a friend (thanks Rob) to sort a couple of things out.

Setting checkpoints was pretty straightforward - following Gary's advice I just randomly scattered then across the map, only being slightly strategic when it came to the very low (20s) and high (90s and 100s) checkpoints.  Originally I set controls all the way up at Tolosa reservoir, but after going out to check sites and come up with questions, it became clear how steep and hence slow the terrain was. We dumped the far northern controls and added a bunch more closer to the hash house.

One major drama was some controlled burns around the tip and Knocklofty a couple of weeks before the event.  A bunch of tracks were closed and had they stayed this way it would have limited route choice options and cut off several controls.  In the end we got lucky and they were opened up on the Sunday before the event.

Initially entries only trickled in and I wondered whether all my (well, Gary's) hard work would be worth it.  But fortunately the trickle of entries became a flood in the days and hours before they closed.  It was great to see so many people on the day, and the weather was better than we could possibly have hoped for.  Most teams seemed to enjoy themselves despite the Himalayan terrain, and the killer goats never materialised.

In all honesty I did enjoy helping out.  I went to a lot of places around the city that I'd never been to before, and discovered some great running and MTB tracks that I never knew existed. I'll definitely be avoiding Gary post-run for a few months yet, but can see myself doing it again.  In the meantime I'm in training for the Australian Champs in November, confident that the mapping and course setting team will be far more competent and on-time than I was.

Thanks to everyone who assisted; Gary of course, but also Adele Winslow who found the hash house location, Cathy McComb, Neil Hawthorne and Clare Hawthorne who checked sites,  the junior orienteering caterers, and all of the helpers on the day.