An unlikely result at the conclusion of the 6 hour event saw the first three teams finishing with the same score. The overall winners came in with a five minute advantage over the runners up, though there were only 26 seconds between second & third overall place getters. All major category winners in the 6 hour event were veteran teams, and the top 6 place getters overall were veteran teams.

There was a clear overall winning team in the 12 hour event, beating the second place getters by twenty minutes and 140 points. The winners visited 43 controls, with substantial vertical relief along their chosen route.

Full results and a map showing the route of the 12 hour winners are on-line at www.rt.asn.au/index.php/event-results. 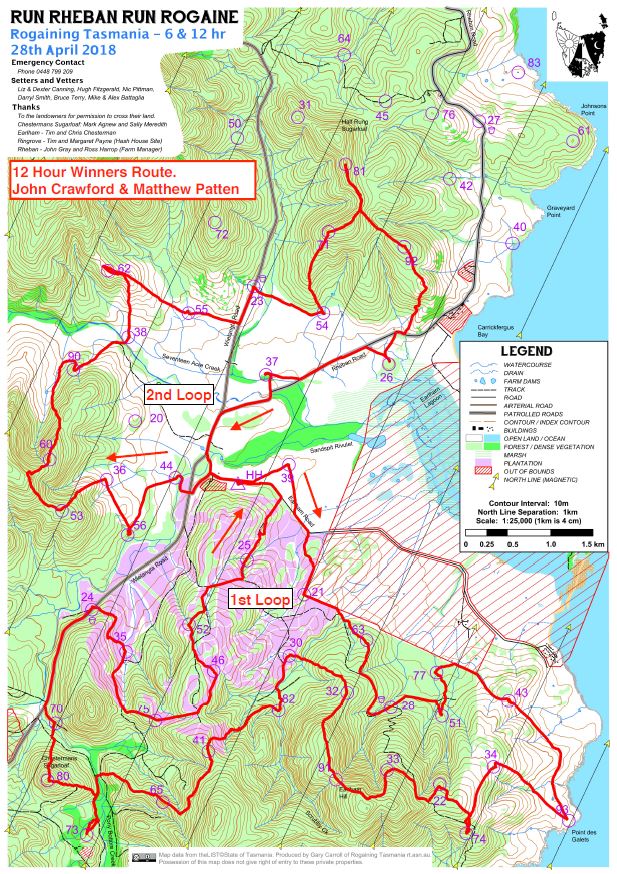 A big thank you to all those who contributed. Liz Canning, a fellow setter, did the lion’s share of the organisation: liaising with landholders, field trip planning, control point distribution, secretarial work, event briefing and Hash House administration. Nic Pittman, a fellow setter, did many hours in the field tackling unimaginably thick scrub until we reduced the map area. He replenished water drop controls during the event, collected in controls afterwards, and helped with event administration. Nic also took on the mapping task, later completed by Gary Carroll. John Dawson, Mike & Alex Battaglia, Darryl Smith & Bruce Terry efficiently vetted the whole course in 4 hours. Rod Bilson prepared the NavLights and passed on a wealth of knowledge to Jeff Dunn. Nick Bowden & Barry Abbott organised the Hash House logistics and prizes. Nicole Carpenter organised and ran the administration tent, teaching us many helpful tips. Sally Wayte helped with admin during the finishes. Bruce Terry and Jeff Dunn deployed controls, and Jeff saved the NavLight software from a calamity encountered as the 6 hour teams began returning. It was also Jeff who coaxed the results from the software. Darryn Cubit once again provided plenty of excellent food, this time with the help of his father, Leon. The RT committee worked tirelessly behind the scenes to keep everything running; we would have far fewer events without these dedicated people, so a big thanks to all of them. Nic Pittman, Jeff Dunn & Darryl Smith have been returning to the wider area to collect far flung setting plates. Thanks also to the tired competitors who helped to pack up and collect in controls on the Sunday morning, especially Simon Allen, Ken McLean, Gary Carroll, and Robyn & Peter Tuft.

A special thank you to the property owners and managers who granted us access to their land: John Gray and Ross Harrop, Chris and Tim Chesterman, Tim and Ben Payne (who allowed us to use their cottage & electricity), Mark Agnew and Sally Meredith, and the Parks and Wildlife Service.

Lastly, a huge thank you to all competitors. Well done to you all for getting out there and suffering for the sake of fun. Congratulations to you all for returning with all team members present, and with no significant injuries to report. A lot of effort goes into putting on one of these events, so it’s great to have people come along and appreciate the work. Organisers want a good outcome, and almost everyone had positive stories to tell.