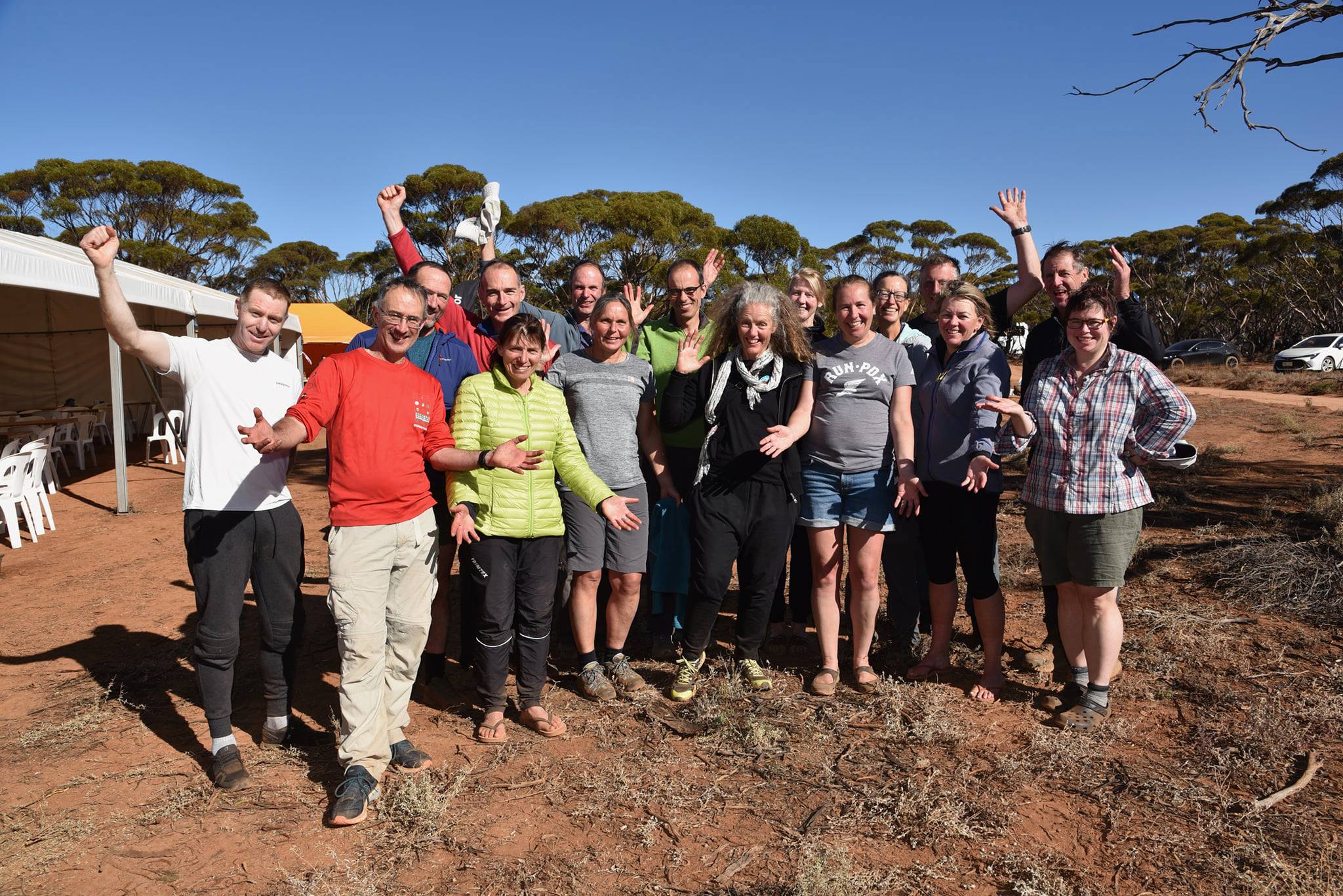 Tasmanian rogainers at the 2021 Australian Rogaining Championships in South Australia

Congratulations to Jonathan McComb and Ian Parker for their overall victory in the 6-hr category, and to Anthony Stoner and Niko Stoner in the 3-hr.

Photographs of teams finishing and at the presentations can be found here. Sincere thanks to Jonathon Rees for the excellent photographs.

Winners’ route maps will be published in the next few days. Meanwhile check out Rogaining Tasmania's Facebook page for feedback.

Many thanks to the setters, vetters and admin helpers who made the event possible. 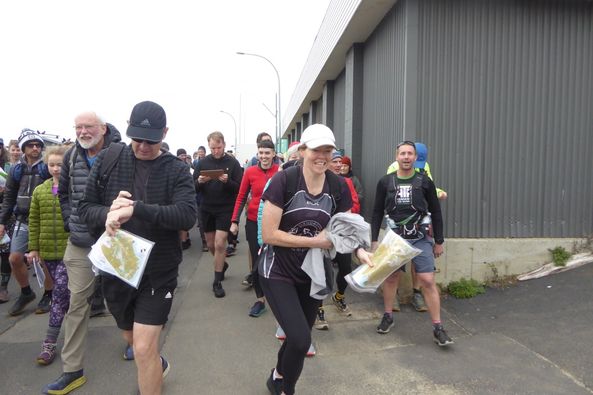 Entries are now open for Rogaining Tasmania’s next event: the Marieville Mayhem Metrogaine in Sandy Bay, Sunday 22 May 2022.

RT’s next major bush event, the Midlands Muster Tasmanian Rogaining Championships, will be held on the 5/6 November 2022 near Campbell Town. A mix of bush and farmland, this event will be the first 24-hour rogaine in Tasmania since we hosted the Australian Championships at the Bay of Fires in 2019. For those who value their sleep over prowling alongside the local nocturnal quolls, there will also be 6-hour and roving 15-hour options.

Also for your diary is the Pyrenees Ponder Australian Rogaining Championships to be held on the 8/9 October 2022 in the Pyrenees Ranges, Victoria (a 2.5-hour drive from the Spirit of Tasmania terminal). There will be 24-hour and 8-hour options. There was a significant Tasmanian contingent at last year’s Australian Championships near Burra in South Australia. Not only did we win the interstate trophy, but there were a significant number of Tasmanian teams with podium finishes in their respective categories. However, you don’t have to be aiming for a top three finish to participate in the Australian Championships. Participants of all ages and abilities should consider entering to experience the thrilling atmosphere of a major bush rogaine.

Further afield is the 17th World Rogaining Championships, 26 August 2022, in the Czech Republic. The event will take place in the Králický Sněžník and Rychleby Mountains along the Czech-Polish border. Entries close 30 April.

If you’re busting for a few more rogaines in the next few months, some notable mainland events include the ACT championships on the 23/24 April in the high country plains of Kosciuszko National Park, set by the reigning Australian rogaine champions, Julie Quinn and David Baldwin. There’s also a Snowgaine 5.5-hr in Victoria on the 23 July, and a 3- and 5-hour Nightgaine in NSW on the 16 July. The Australian Rogaining Association maintains a calendar of all Australian events.

I had the pleasure of dragging a first-time rogainer, Hamish Lockett, around the Lindisfun metrogaine by foot. We had figured that given the large map area and possibility of a lot of street running, the winning team would probably be covering somewhere between 30-40 kms, depending on where the big points were spread across the map, and we felt up to the challenge.

Upon collecting the map, it was clear that there were two overarching route options, focusing on either the hills of the Meehan Range or south in the streets of Rosny and Howrah. Hamish and I quickly agreed that we needed to see a few more high scoring controls in the hills for it to be worth our while, especially since he considered his strength to be flat running, not the hills. We ended up with a route which took in most of the big controls in the streets of the south, plus a few of the lone hills of the eastern shore. I was glad to find that some of our competition had decided to head into the hills. It would be interesting to see which option proved best!

The weather was hot and sunny, a pleasant respite from the rain of the past few months. Unfortunately, my Garmin watch insightfully informed me that I was only 2% adapted to the heat, and as we averaged 6min/km in the first hour of the rogaine, it quickly became apparent that managing our bodies throughout the 4 hours was going to be key to a successful run.

We headed south trailing Niko and Jett before traversing around Rosny Hill, past Blundstone Arena and quickly arriving at our southernmost point near Wentworth Park. The journey back north involved some occasionally confusing but mostly straight forward navigation through the numerous tracks of Waverley Park and Flagstaff Gully. Climbing the last obstacle for the day, Natone Hill, we both dealt with some leg cramps (a recurring problem for me while rogaining) before arriving back at the hall with 3 minutes to spare. 32kms with 1000m elevation got us to 38 controls totalling 1880 points, enough to secure 1st for the foot category. Thanks once again to everyone who contributed to the event. It was a fun day out with friends.

For those of you wanting to read about daring exploits and dramatic tales of human endurance I would suggest the report from the foot entrants would be far more enthralling. This is a tale of moderate ambition and riding far from the edge. [Jeff says: as a team endurance sport, individuals within the same team will experience a given race differently: maybe one as a nice adventure involving some physical activity, and the other as a desperate feat of human endurance. The latter can give some satisfaction, after a sufficient period of physical and emotional recovery (I’m okay now thanks). Anyhow, back to Ken telling his story…]

The genesis of the “dream team” was a discussion I had with Jeff at an orienteering event along the lines of let’s go for a ride, the metrogaine might be fun. Jeff mentioned he had previously set an event in the area and knew the area pretty well. This knowledge and Jeff’s navigational skills would certainly compensate for my renowned ability to make navigation mistakes whilst under pressure.

Ben, Charlotte and I set and vetted the Lindisfun metrogaine. We tried to set a fun course that had something for everyone: a challenge for the people wanting to push themselves with lots of controls, big hills, and some hard to reach places requiring interesting planning decisions. "To Meehan or not To Meehan" was an important question for competitors planning longer routes, and control 63 proved a challenging find for a few groups. The sunny eastern shore offered plenty for families - fun riding and walking along the foreshore with plenty of opportunity for bakery and ice-cream stops on what ended up a gloriously warm spring day. 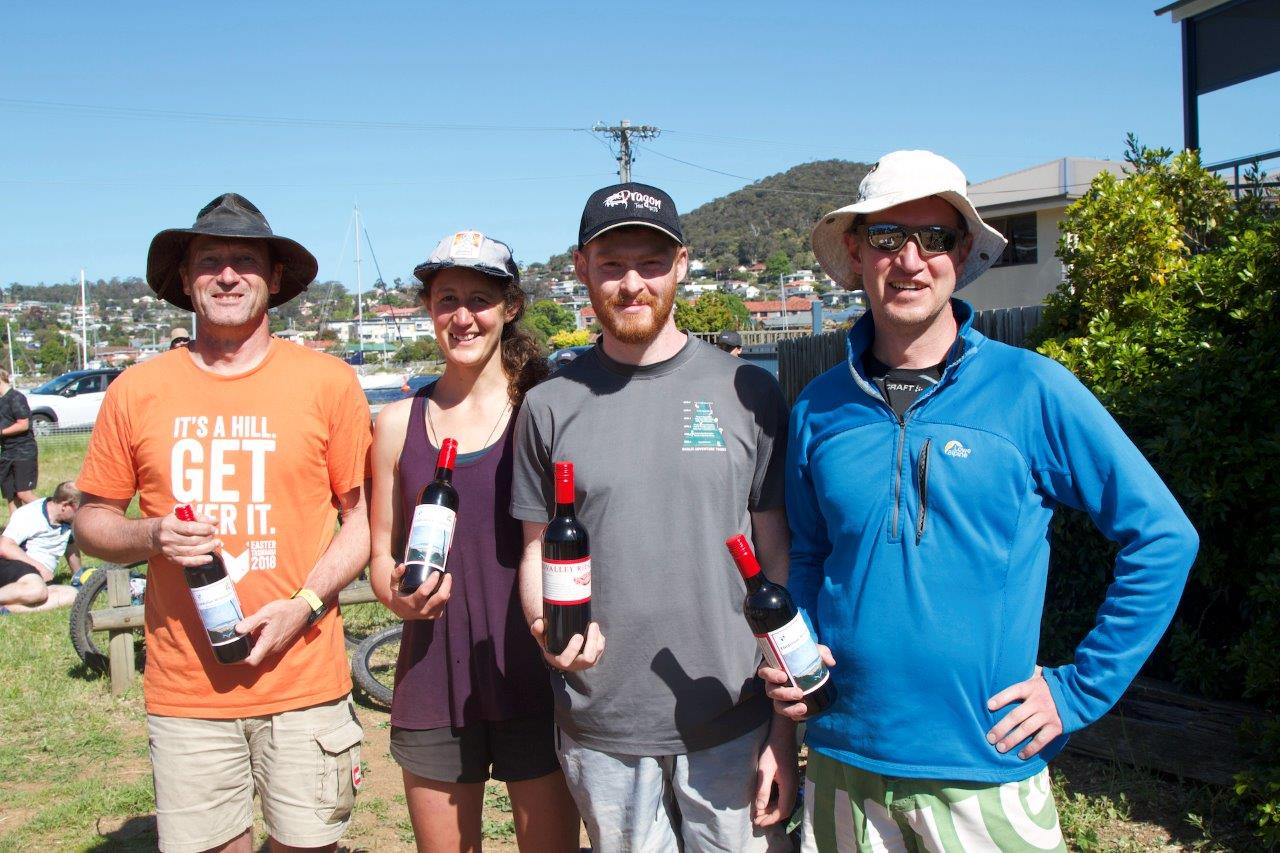 2021 was a successful year for Rogaining Tasmania. Our state has remained free of COVID-19 community transmission enabling us to run our events without disruption, which is certainly not the case on the mainland. Our events were all successful, well-organised and fun! Attendance at our events continues to rise, leading to profitable events and allowing for our entry costs to decrease.

In the past year we ran the following events:

Honorary life membership is awarded for outstanding service to rogaining in Tasmania. Adele certainly ticks all the boxes.

Adele competed in her first rogaine in 1997, and she quickly became involved in event organisation and administration.

In 2001 she took on the task of Event Director for the Honeysuckle 24- and 8-hour rogaine. This was one of Rogaining Tasmania’s most successful events, mainly due to her team management skills, planning ability, and attention to detail. It was here that her landowner negotiation skills first came to the attention of the committee.

The Lindisfun 4-hour metrogaine has been run and won, although all the entrants were winners on the fun course in the ideal weather.

The results are on the web at https://www.rt.asn.au/event-results. Two hundred photos taken by Carey Barlow can be found here. 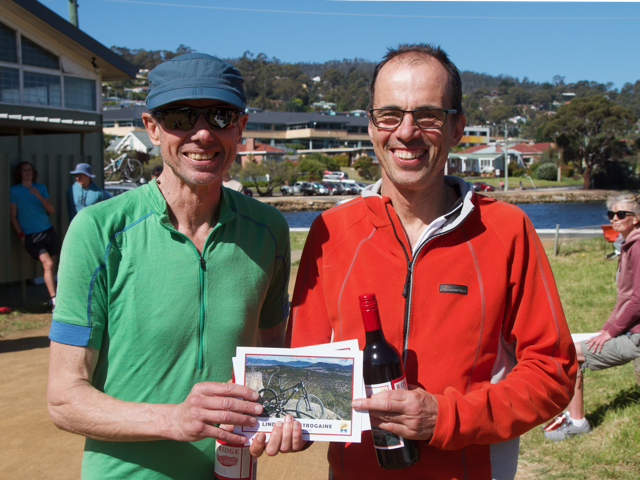 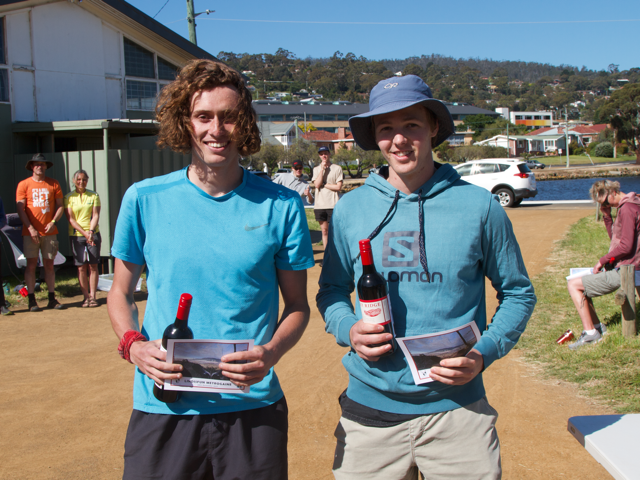 To run more rogaines we need more people to run them, which means more people who can set a good course. So we organised a workshop for potential course setters on 10 October, feeling that we'd be pleased if a handful of people expressed interest. We were more than pleased when nine potential new setters turned up, together with old hands Gary Carroll, Bernard Walker, Sara Brain and Liz Canning. Having course-setting wisdom available from such a broad range of experience was a real bonus. 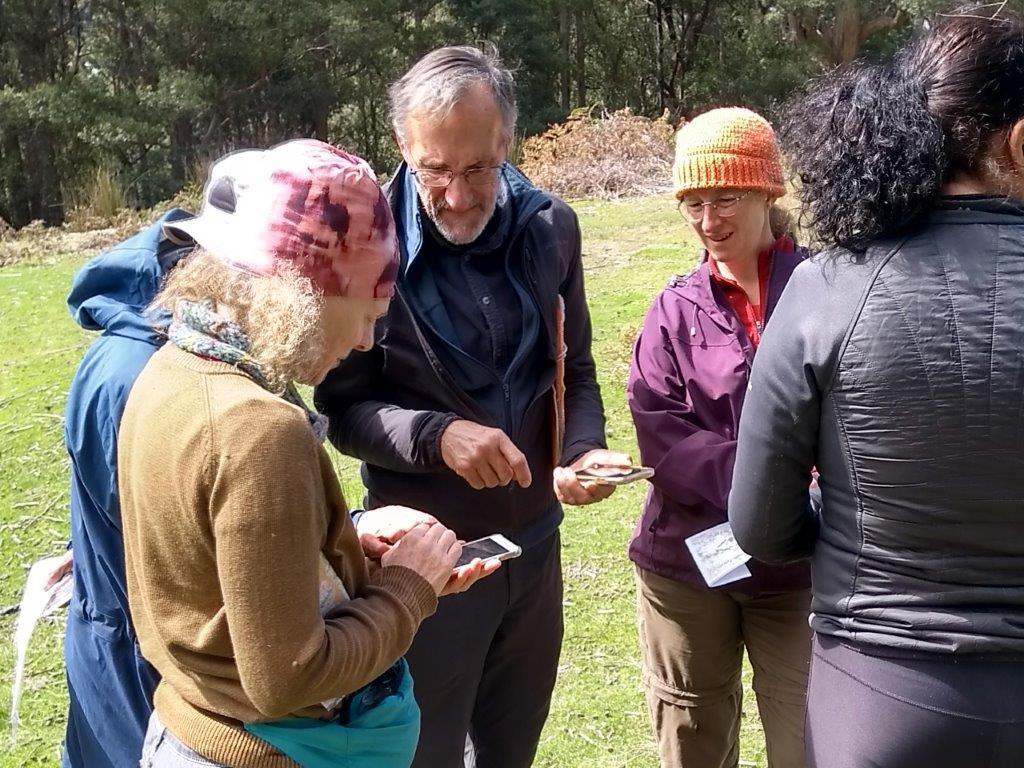 The location was our bush block near Kettering, which was ideal because it had a nice meeting room (our lounge room, although a bit of a squeeze for the crowd) and a very good map (very conveniently produced previously as a test of Lidar-based vegetation mapping). Most of what we covered was focussed on bush events because they are the most challenging to set well, but we also touched on metrogaines and (very briefly) some other aspects of event organisation (you do realise that there is a whole lot more to organising a rogaine than just setting the course?)

Results for both events along with the 3 and 6 Hour winning routes are available HERE. Congratulations to Oskar Bucirde and Joseph Dickinson for collecting 50 checkpoints over 40kms to be first overall in the 6-hour. The 3-hour was a battle of the junior men, with Niko Stoner Jett McComb best on the day visiting 30 checkpoints over 23kms.

There are photos from the event at https://photos.app.goo.gl/FQviDt1MBRREDKPx9

Thanks to everyone for coming.